Capital Letters - Should I use them?

Capital letters, covered on the Greek & Cyrillic page of the guide, were mostly added so that you can distinguish between different units or constants which are in different cases when writing equations. Subsequently, you don't really need  capital letters in normal writing, so if it's easier you can forget about them.

Double Letters - Is there a rule concerning those?

Letters - Can they overlap onto other layers?

Yes, a letter form doesn't necessarily need to be confined to the layer. You can have it overlap into other layers or go outside the form so long as A) it's clear which layer it belongs to and B) it doesn't cover any other letter forms.

That being said, a letter form which connects to the layer border doesn't necessarily need be pointing inwards on the concave surface of a layer, Ω-shaped forms could be positioned facing outwards on the convex side instead.

Letters - What if I really need to write a letter C?

Although it was cut from the 5x5 grid for the Latin alphabet, the Cyrillic alphabet (page 9) reintroduces the letter C as there are no letters in it's alphabet which could replace it. (Thanks Nelissya for pointing that out!).
Subsequently, if you really need the letter C, you can use the Cyrillic C. If you'd like it to also be circular, you can add a letter alphabet mark (page 10) to avoid it being confused for a 'Q'.

Letter Forms - Can a line touch the outside of a U, C or D form?

So long as the line doesn't meet the conditions of passing through the form, it's allowed. Just avoid doing so with O forms, as that would make them a Q form if it only touches the outside - see below.

Line Modifiers - What counts as a line passing through the form? 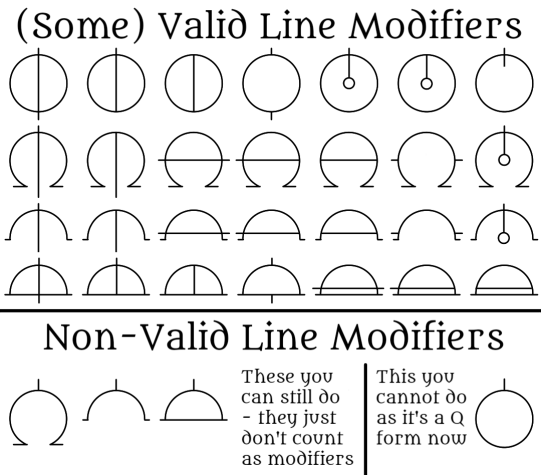 Sentence Direction - Do I need a thin-thick ring and a full stop?

You only really need one of them if the sentence flow has two clear ends, but with more complex sentence flows it's advisable to use both.

Sentence Direction - Can sentences cross themselves?

Absolutely! So long as the sentence flow is clear, there's no rule against saving time by making sentences cross the same word/s twice.